Can I Get A Mortgage While I’m Furloughed? Or Refinance? 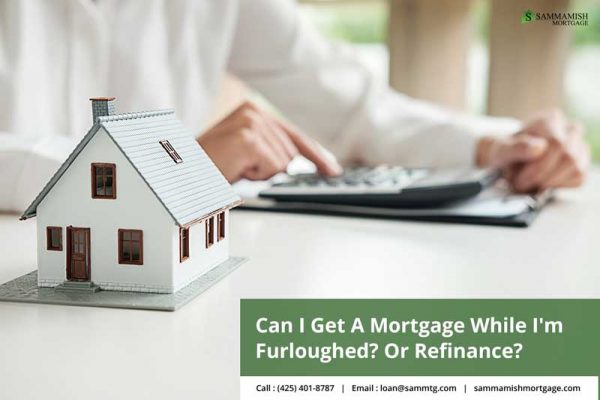 A job represents many things: security, pride, worth, and contribution, to name a few. A job also makes a mortgage applicant less of a risk as it generates consistent income. Yet in the age of COVID-19, having a job and working at it sometimes means two different things. As lockdowns and shelter-in-place orders became the norm, many businesses had to furlough their workers. Some had to close down completely, leaving their employees adrift. For those furloughed, uncertainty taints their lives. When will they be called back? Will they make the same amount of money? Will the employer even remain in business? These unknowns breed frustration, especially as interest rates fall. People wonder: “Can I get a mortgage while I’m furloughed?”

What is furloughed, what does this mean? Am I being laid off? Yes and no. A layoff is in fact a termination, you are being fired, but for no fault of your own. The company can no longer afford to compensate you so it must eliminate your job or consolidate it with another. Like a layoff, a furlough occurs when the employer is unable to pay employees. Unlike a layoff, a furlough is, at least in expectation, a  temporary situation. The employee is not terminated but, instead, directed to stay home until conditions improve. Ordinarily, furloughed workers are not paid though they might continue to receive benefits. Sometimes, furloughed employees are given provisional dates for when they can return.

Furloughs in WA, OR, ID, and CO

State employees are often among the last to experience furlough, but not anymore. Under restrictions imposed by the governor, Washington state government workers are to be furloughed one day out of the work week. Those who participate in the Shared Work Program will not suffer any reduction in retirement benefits but will, of course, work for less remuneration. Regarding the private sector, Amazon, Microsoft, and Boeing have all had to resort to combinations of layoffs, furloughs, remote work, and reduced hours for employees at their respective in-state headquarters. T-Mobile, another big Evergreen State business, has shrunk its retail store presence by nearly 80 percent.

Oregon companies are meeting mixed results as far as retaining their employees throughout the course of the pandemic. Nike, for example, has announced a regime of staggered schedules and work-from-home alternatives for its Beaverton headquarters. Meanwhile, Daimler Trucks had shut down its manufacturing facility at Swan Island near Portland for a month stretch, placing 600 employees on furlough without pay. In addition, the USA’s third largest auto retailer, Lithia Motors, put 10 percent of its administrative staff in Medford on unpaid leave. Many state government staffers are now obligated to be off minus compensation for one day out of each month.

Gem state institutions of higher education are feeling the coronavirus crunch. Since the state government has trimmed nearly five-million dollars from the University of Idaho’s allocation for the next fiscal year, the university’s president is asking administration, faculty and staff members to begin with 24 hours of furlough, between July and late January of 2021,  suggesting that additional hours may be necessary. Idaho State University faces a similar financial challenge and plans layoffs and furloughs to meet it. While these occur, the Boise-based semiconductor leader, Micron Technology, Inc., is reducing its staff by 500, for starters. Fortunately, ADM Edible Bean Specialties, Idaho’s biggest employer, remains largely intact,  though the parent company is furloughing many laborers in other states and divisions.

In mid-April, the JBS meat processing plant in Greeley shut down due to an outbreak of COVID-19. Workers were furloughed, though most have since returned to their duties at the facility. Also based in Greeley, the Pilgrim’s Pride food company furloughed 1,100 employees across the United States through the number of Coloradans affected is unclear. Arrow Electronics, another major in-state company, has managed to avoid significant furloughing because of the increased COVID-driven demand for ventilators. Even the Pepsi Center in downtown Denver has utilized many of its 267,000 full and part-time staffers as it makes up for lost revenue as a COVID-19 testing center.

How Do Lenders View Furloughs?

As is evident, some furloughs are of limited duration and clear regarding the terms of returning. Others are open-ended, with an “until further notice” implication about them. The nature and dimensions of a furlough go a long way toward determining whether or not a lender will look upon an applicant as gainfully employed. As with the Washington government example, a once-a-week furlough day is still continuous employment. However, with no sign of an end to such an arrangement, a bank or finance company may have to use the four-day, prorated income as the baseline on which to underwrite a loan.

Other factors are at play, too. Two-income households may survive an application review if the furloughed partner receives the lesser compensation. In addition, if an employer publicly announces a return or re-opening date publicly, that can reassure nervous lenders, as long as the reactivation is not too far into the future. The intention is not enough here. The company must resolve in broad daylight its plan to revive operations on a specific given date. As the economy recovers ever so slowly, lenders are looking for assurances rather than hopes and maybes. A ‘stay tuned’ response from an employer does not bode well for a mortgage applicant on furlough.

While there are no hard and fast rules governing applications by employees placed on temporary leave, you can get some clues from the large mortgage investors like Fannie Mae. Since these organizations purchase so many mortgages each year, their standards are reflected in lender credit guidelines.

Most mortgage lenders will seek compliance with these guidelines, though this does not guarantee acceptance.

As noted, the amount of poison that furloughed employment injects into an otherwise acceptable mortgage application will vary according to the terms of the leave. Continued compensation combined with clearly defined furlough terms is more favorably viewed over the unpaid leave of open-ended continuation. Even if the latter scenario prevails, all is not lost. You can take measures to approve the attractiveness of the application.

Talk to a mortgage representative to find out what sort of leeway lenders are allowing with regard to furloughed applicants. You may discover other options that get you that approval even when a job furlough ensues.

Sammamish Mortgage has been helping people in the Pacific Northwest achieve their dreams since 1992. If you are looking for financing for a home, we can help. Sammamish offers mortgage programs in Colorado, Idaho, Oregon and Washington. Feel free to Contact us if you have any mortgage-related questions. Also, you can View Rates on our site or simply Apply Instantly. You can also easily get a Rate Quote instantly.