Olympia: One of the Affordable Housing Markets in Washington 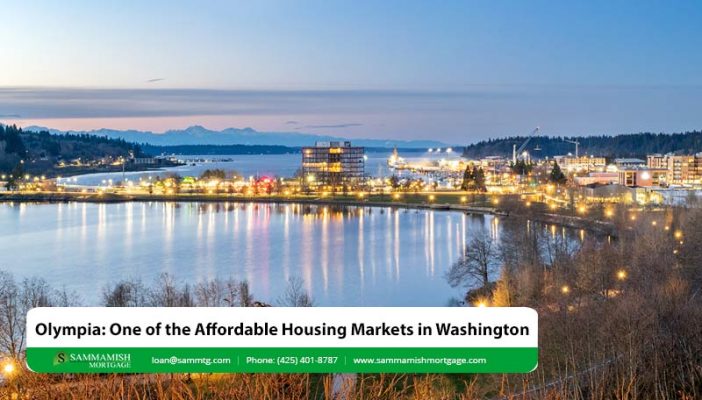 Seattle has traditionally been the higher-priced real estate market in Washington State, but there are plenty of other areas in the state that offer more affordable housing, and Olympia is one of them.

Home prices in the Seattle metro area have risen sharply over the last few years, creating affordability issues for some buyers.

But other housing markets in the state are much more affordable by comparison. And today, we’ll look at Olympia, Washington, the state capital.

Let’s start by putting “affordable” into context. Here’s a look at the median home prices for Olympia, Seattle, and the nation as a whole, as of February 2022:

Note: These figures were obtained by Zillow in February 2022.

From this comparison, we can see that Olympia is a more affordable housing market when compared to Seattle. The median home price in Olympia is higher than the national median, but it’s miles below Seattle. So it’s a more budget-friendly option for home buyers who want to get more for their housing dollar.

The median house value in Olympia rose by around 24.1% from February 2021 to February 2022. These price gains mirror other real estate markets across the country.

Right now, the real estate market in Olympia is very hot. Prices have increased rapidly over the past year and are expected to continue rising at a healthy pace over the next 12 months.

While home prices in Olympia are in the affordable ranges for many buyers, don’t let that fool you.  The local real estate scene is still highly competitive, with buyers competing for scarce inventory. That’s the situation as of early 2022, and those conditions are expected to persist for the foreseeable future.

Economists say that a “healthy” and balanced real estate market has somewhere around four to six months of inventory. As of February 2022, Olympia, Washington had less than a 1-month supply of homes for sale. The national average for the same timeframe was just over three months’ worth of supply, and even that is slightly below normal.

Fact box: Olympia is the capital of Washington State and home to around 51,000 people. It’s located roughly 60 miles southwest of Seattle, at the southernmost point of Puget Sound. The State of Washington is the largest employer in the area. The indigenous Coast Salish people used to refer to it as the “place of the bear” in their native language.

Homes are not spending very much time on the market before finding an interested buyer and being sold. This is indicative of a fast-moving real estate market where properties get scooped up quickly.

The take-home message is that home buyers in Olympia should start their searches early and be prepared for competition. With steady demand and scant inventory, the housing market in Olympia could create challenges for some buyers.

But with a relatively affordable price tag, compared to the state’s other major population centers, it’s still an attractive market for budget-conscious buyers.

Here’s a recap of the key points in this report:

Sammamish Mortgage is a local mortgage company serving the broader Pacific Northwest region, including Washington state, Idaho, Colorado, and Oregon. We are proud to offer a wide variety of mortgage programs and products with flexible qualification criteria and have been serving borrowers since 1992. Please contact us if you have any questions or are ready to apply for a home loan.

4 min read
Average Home Price in Redmond, WA for 2022
Thinking of buying a home in Redmond, WA? If so, you should determine the average home price before...
Read more

4 min read
Average Home Price in Bellevue, WA for 2022
Thinking of buying a home in Bellevue, WA? If so, you should determine the average home price...
Read more
Show 19 more posts
from this category