Portland, OR Housing Forecast for 2023: Changes Are Coming 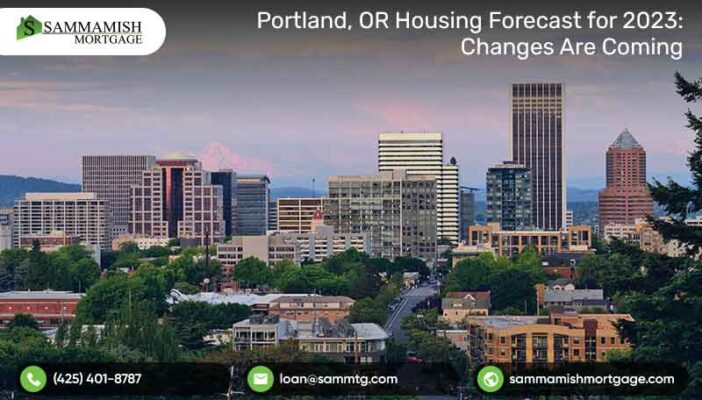 As we explained in a recent blog post, the real estate market in Portland, Oregon has undergone quite a few changes in 2022. And it looks like that could continue into 2023 as well.

Recent forecasts and predictions for the Portland-area housing market suggest that things could be very different next year, compared to what we’ve become used to.

The biggest change has to do with the overall pace of the real estate scene. It’s taking longer to sell a home these days, partly due to higher house values and mortgage rates. This has shifted the market in favor of buyers.

Here are three possible predictions for the Portland, Oregon housing market in 2023.

Like most metro areas across the country, the Portland area experienced a significant increase in home prices over the past two years. This was partly due to a pandemic-fueled surge in purchases. In fact, Portland was one of several “pandemic boomtowns” that experienced an influx of buyers from other parts of the country.

As of October 2022, the median home value for the Portland-Vancouver-Hillsboro was around $571,000. That was 10% percent higher than a year earlier. But when you look at the month-to-month data, you can see that prices in the Portland area have actually dipped slightly.

This is a cycle we’ve seen in the past. A surge in demand from buyers pushes prices up, eventually leading to a decline in demand. And when purchase demand drops off, home prices tend to cool as well.

It’s too soon to say if the recent dip in prices is a short-term trend, or the start of a more sustained downturn. But it’s a safe bet that Portland-area home prices will rise a lot more slowly in 2023 than they have over the past 18 to 24 months.

Even so, it’s still a good market for buyers. History shows that homes in the Portland, Oregon metro area hold their value well over the long term. And that’s what matters to most buyers.

Higher housing costs have reduced the number of buyers in the real estate market. This in turn has reduced the competition level among buyers, offering them a chance to “catch their breath” after the frenzied conditions of the past two years.

Which brings us to prediction #2 for the Portland real estate market. Next year, the home-buying process could be a lot less stressful. And wouldn’t that be a welcome change?

“Inventory is sitting just below its August peak, and listings are taking longer to go pending. Taken together, that all means it’s a better time to buy for those still in the market. Buyers will have a less stressful experience that they’ve had over the last couple years.”

Later this year and into 2023, Portland, Oregon home buyers might find that they have more bargaining power as well. More houses are coming onto the market, and a significant number of them have had price reductions. This means the market is shifting in a way that could favor Portland home buyers well into 2023.

Overall, housing market inventory in the Portland area has increased in recent months. We covered this in a previous blog post. But there’s a new variable that might limit inventory growth going forward.

Since the start of this year, the average rate for a 30-year mortgage rose from 3.22% to 6.7% (as of October 2022). Because of this, many homeowners in the Portland area have lower interest rates on their mortgages than the current market rates. And that might make some of them reluctant to sell.

But higher rates might not be that big of a deal for some sellers. For instance, Portland-area homeowners who sell their homes at a big profit and move to a more affordable area would still be in a good position, despite today’s higher mortgage rates.

Here’s the bottom line on the inventory situation. Real estate market supply in the Portland area has increased over the past 12 months. But those gains could slow down if more and more homeowners decide to stay put instead of selling. So while buyers could have more options to choose from in 2023, it will still be a tight housing market overall.

The general forecast for the Portland real estate market can be summed up with a couple of sentences. Buyers should be able to enjoy more favorable conditions in 2023, especially when it comes to their negotiating leverage. But they’ll still want to bring their ‘A’ game as they start the house-hunting process.