Seattle Mortgage Rates Could Drop in 2023, According to Forecast 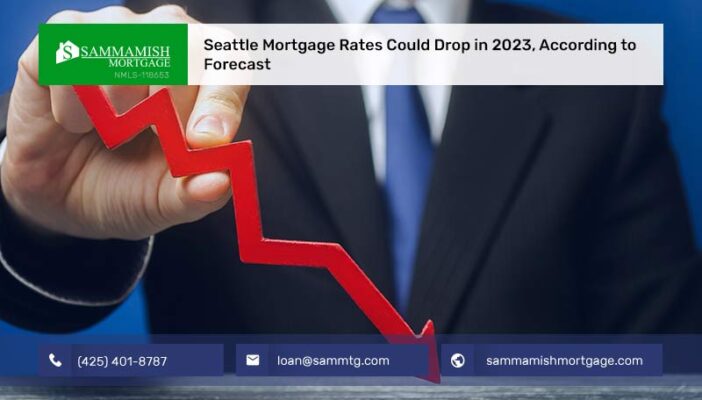 With the end of the year coming on fast, we thought it was time for an updated mortgage rate forecast for Seattle-area home buyers. Specifically, we’ll look at two recent forecasts published by leading economists and housing analysts.

Here’s the short version: The latest predictions suggest that home loan interest rates could trend downward over the coming months. That would be a welcome change for borrowers, after the surge in rates we saw during the first half of 2022.

Seattle mortgage rates rose sharply during 2022, surprising industry analysts and home buyers alike. The average rate for a 30-year fixed mortgage (the most popular home loan option) jumped from 3.2% in early January to a high of 7% in November.

Rates have declined a bit since then, signaling that the surge might be over.

According to a December 8 report from Freddie Mac:

“Mortgage rates decreased for the fourth consecutive week, due to increasing concerns over lackluster economic growth. Over the last four weeks, mortgage rates have declined three quarters of a point, the largest decline since 2008.”

Now, as we enter the holiday season and the new year beyond, a lot of Seattle-area home buyers are wondering the same thing. Will Seattle mortgage rates drop in 2023, as they have in recent weeks? Or will they trend upward again?

Due to the many variables involved, no one can predict future mortgage rates with total accuracy. But that doesn’t stop economists from trying. And a pair of recent forecasts suggest that mortgage rates in Seattle and across Washington could decline further during 2023.

These predictions bode well for home buyers who are planning to make a purchase next year. So let’s take a look at them one at a time.

Forecast #1: A few weeks ago, Freddie Mac issued a quarterly housing market and mortgage industry forecast extending through 2023. In it, they predicted that mortgage rates nationwide would trend downward over the next year or so. Specifically, they issued a quarter-by-quarter prediction that 30-year loan rates would average 6.6% at the start of 2023, and decline to around 6.2% by the end of next year.

Forecast #2: A more recent forecast from the Mortgage Bankers Association (MBA) predicted a similar trend, but with a steeper drop in rates expected. In November, MBA’s analysts said they expect 30-year mortgage rates to average around 6.2% during the first quarter of 2023, dropping to 5.2% by the fourth quarter of that year.

But it’s worth repeating: mortgage rate forecasts are the equivalent of an informed guess and thus far from certain. So we shouldn’t get too hung up on the precise numbers being forecasted here. The point is, if these forecasters are anywhere near accurate, Seattle mortgage rates could level off in their current range — and possibly drop during 2023.

A Cooler Housing Market Next Year?

The rise in mortgage rates we experienced during 2022 is one of several factors that have cooled the Seattle housing market. Higher housing costs, inflation, and economic uncertainty have all contributed to that trend. It’s just one of those recurring real estate cycles we go through from time to time.

While home buyers might be discouraged by today’s higher mortgage rates, we should keep them in perspective. Last week, the average interest rate for a 30-year fixed mortgage was 6.3%. And while that’s an increase from the same time a year ago, it’s still a good rate from a broader historical standpoint. In the 1980s, for example, 30-year mortgage rates averaged as high as 17%.

Additionally, a cooler real estate market could actually benefit Seattle-area home buyers. The frenzied, high-pressure market of 2021 has settled into a slower pace. As a result, buyers can now take more time to consider each property, research sale prices, and take other important steps prior to making an offer.

Ready to Explore Your Financing Options?

Planning to buy a home in the Seattle area during 2023? Need a mortgage loan to make it happen? If so, we can help.

Sammamish Mortgage servers home buyers and homeowners all across the state of Washington. We offer a wide range of financing options, including FHA, VA and conventional. Please contact us if you would like to receive a rate quote or apply for a home loan.